An indoor snow centre in the Netherlands is going green, thanks to solar power

A project to make one of the world’s largest indoor snow centres almost self-sufficient in their renewable energy needs has gone live.

SnowWorld Landgraaf in the Netherlands, which has a number of indoor ski slopes up to 550m long, has had 10,000 solar panels installed on its huge roof by green power company Indi Energie, working with the Dutch full-service solar company KiesZon. A second, smaller SnowWorld centre at Zoetermeer had 3,000 panels added to its roof last year.

Landgraaf Snow Centre (pictured below) has had 10,000 solar panels installed on its roof over the last two years 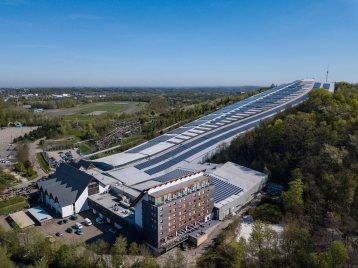 Overall, the project, described as ‘the most complex solar panel project in Europe,‘ has taken two and a half years to complete.

On very sunny days the solar panels on Landgraaf’s roof will produce more energy than is needed to meet the centre’s energy needs, at which point surplus energy will be delivered to the local community. Altogether, the two SnowWorld locations will generate approximately 2,500,000kWh of green energy every year.

“Eventually,” said Wim Moerman, CFO at SnowWorld, “the goal is to become completely self- sufficient.”

Several other indoor snow centres in Germany and the Netherlands also have solar-panel-covered roofs to meet much of their energy needs, including one German centre built on a former coal mine. Ski Dubai has also committed to cutting its energy needs, and says these are now down to the equivalent of a small hotel.